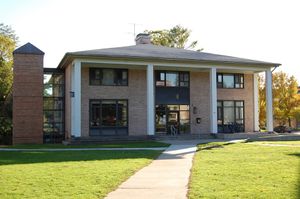 Brooks House from the front

Part of the Spencer Neighborhood, Brooks has 4 single rooms and 12 double rooms, housing mainly sophomores that had bad picks and were forced to pick into doubles. Although the interior of the house consists of off-white cinderblocks resembling a prison, the living isn't that bad. Very conveniently located across the street from Greylock Dining Hall, the '62 Center for Theatre and Dance, Weston Language Center and not too far from the Science Quad.

Decked with a pool table, fireplace, full kitchen, outside built-in-grill and a countertop that works naturally for beirut, the basement is an area of common gathering for social events. There is one washer and one dryer available, and an elevator that works.

Has two separate rooms; the TV room and a study room. The TV room has a sweet flat screen TV and provides access to the working elevator. The study room has a fireplace, a piano, tables and chairs.

Literally 5 steps up from the first floor, houses 5 of the 12 doubles in Brooks. The rooms are all fairly huge and all have humongous windows, with decent views for the most part. Has two bathrooms, one of which has two shower heads in one space. Good for those without inhibitions.

Houses the 4 large singles and the rest of the double rooms. 3 restrooms, one of which is a humongous handicap restroom. Unfortunately not totally escapable from any social scene with loud music.