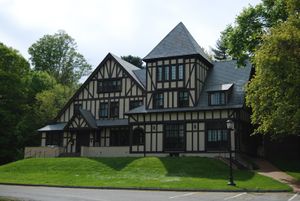 Also see the Williams College listing for Garfield, and the WSO plans.

While Garfield House's true location is somewhere in upstate New York, it's official listed location is on South Street, by the traffic circle on the road leading to the Clark Art Museum. It is a former fraternity, named for President James A. Garfield, class of 1856, and a member of the Delta Upsilon fraternity.

Garfield House is Tudor-style, with a light brown facade with dark brown wood forming triangles. It was built in 1924. It has a kind of turret on the right. It has probably been extensively renovated, because it now has two stairways, which both seem retrofitted since they are made of concrete.

There is also a side room with a piano. The basement has a kitchen, a pool table, and laundry machines. The main living room has a wall of windows facing South Street, through which one could theoretically enter if one had forgotten one's ID card.

Garfield has a great lawn to the left when facing the front of the house, where many IM baseball games and frisbee games take place. It also has a parking lot.

As Garfield is largely comprised of singles, it houses almost exclusively seniors. However, in recent years, small but unexceptional groups of sophomores can often be found scattered throughout doubles in the upper levels of the building.