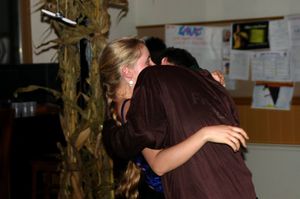 Jonathan Landsman, in a monk costume, finds himself one of the first to try to play his own game, and struggles to pry the fruit of the original sin from Margit Sande-Kerback '05. It's good to be the caller.

For Dancing Folk's Halloween Contradance of 2004, Jonathan Landsman planned a competition composed of three events, to be contested by dancers from the Odd Quad versus others. Two teams of about ten each lined up to play, with some Odd Quadders having to join the opposite team to even the numbers. 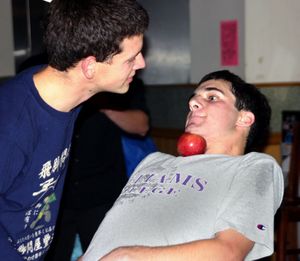 The first event was the apple relay, in which teams made a line from the back to front of the hall and had to pass a single apple from the crook of the neck of one member to the next. This being a game he'd played when he was a little kid, Jonathan thought this would be quick, good, clean fun, but found that it was actually crazy difficult. The students soon discovered that not just the best, but only way to succeed was for the two passers to press chests against each other . . . everyone was an amazingly good sport, did it with gusto, and had an amazingly good time. Non-Odd won. 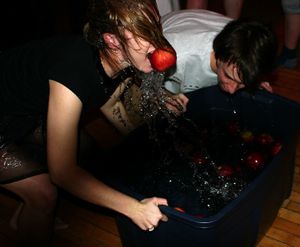 Molly Hawkins '08 erupts from the water, triumphant after only a few seconds of bobbing against Evan Miller '06.

The second event was a standard apple bob relay; 2 people going for one of the 20 apples in a bin filled with water. As it turns out, this was one of Molly's favorite games, and she set the tone by getting her apple with amazing speed and vigor, which every subsequent racer emulated. This resulted in not only a very wet floor, but very wet people and, once again, a boatload of fun. Odd Quad won. 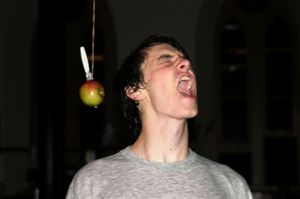 Evan Miller '06 tries to take a bite of his apple. If his technique were a computer program algorithm, it would probably be something out of JOSE.

The third and final event was snap apple: a game Jonathan had learned by chance on his trip earlier that day to the Mark Twain House with his English class. Before the dance, he hung 20 plastic knives from the ceiling on long strings down to head level. Once people had bobbed their apple out, he instructed them to go to a string on their team's side of the hall and jam their apple onto it. Players now had to close their eyes and simply try to take a bite out of the apple; the first team on which all members succeeded would win. The hall now fell very silent for the 20 minutes this event took, as everyone found that this was way harder than Jonathan had anticipated. To those with eyes open, the scene was total hilarity, as apples made slow orbits around unsensing heads with gaping mouths, and the country's brightest undergraduates invented strategies to face a novel challenge. The event was eventually called before either team could finish, so dancing could resume.