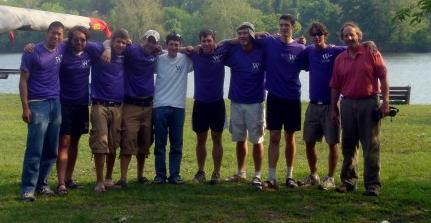 The Williams Men's Varsity Crew is one of the most consistent and dominant crews in New England. Frequently ECAC finalists, typically New England medalists, and more often than not Little Three champions. Graduating Captains for this past year 2010-2011 were Dan Kenefick, Jack Wadden, and Joey Kiernan. For the upcoming 2011-2012 season's Captains are Noah Schoenholtz '12 and Alex Treco '12.

For the history of the crew team, see Crew.

Being a year-long sport with a relatively short race calendar, Williams Crew is full of athletic traditions to punctuate the year. Some, though not all, are unique to the varsity men. Roughly in order, they are: