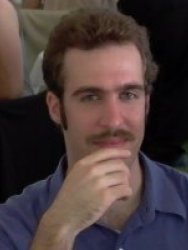 Brent Yorgey graduated from Williams in 2004. During his time as a student, he was involved with Williams Students Online and the Williams Christian Fellowship, and sang with the Ephlats, the Concert Choir, and Chamber Choir. His living quarters included Sage F 105 ('00-'01), Dennett 216 (which no longer exists as such -- '01-'02), Currier N24 ('02-'03), what is now Prospect 404, sort of (summer '03), and Thompson 302 ('03-'04). He majored officially in Computer Science and unofficially in Mathematics. He currently lives with his wife Joyia Chadwick ('05) in Washington, DC, where he currently works as a software developer (although he used to teach high school computer science and mathematics). Here is their wedding picture.