Difference between revisions of "Bridge Club" 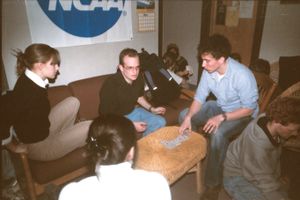 The spring after that winter study was the peak level of the club's popularity in recent time. Bridge nights typically had at least two tables, often more. The Boston Globe got in touch quoted members of Williams' club in its article on the return of bridge to college campuses. At the end of the year, the club held a second duplicate tournament, notable for 24 players again, including two players from the local community, 8 new players, three professors, and two high-school students.