Difference between revisions of "Dana-Towne Library" 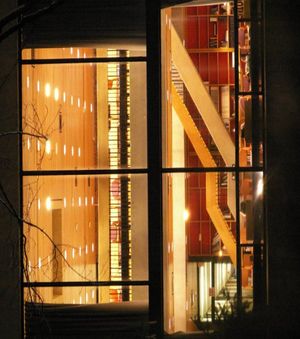 The Dana-Towne Library, better known as the Math Library, is a popular place for Math majors and others to study. The lower floor is surrounded by math department faculty, and the upper floor, which forms a ring around a central open space, is surrounded by psychology department offices.

When asked what has made the Williams math department so successful1, some math professors cite the configuration of their space. Students can easily collaborate in the math library, and their professors' offices are right there if they have a question since their office doors are always open. However, there are book stacks between the table area and the offices, to separate the professors and the students so that they're not staring at each other, because that could get awkward.

1 The math department has been very successful in the following ways: