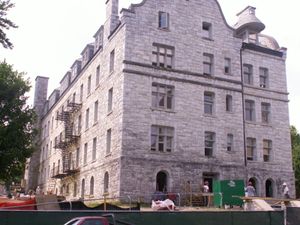 Morgan used to have four vertical entries: Morgan West, Midwest, and East (if you wonder how people knew whether they are in "East or "Mideast," the walls were various color shades). Morgan rooms came in various arrangements, some were part of a small suite; others were off a hall and across from each other.

While the rooms and bathrooms are nicely renovated, the lack of common rooms in Morgan is a downfall. The entire fourth floor shares a single common room. Morgan's kitchen though, is quite frankly phenomenal. (But please, stop stealing our furniture. No, seriously.)