Difference between revisions of "Paresky Center" 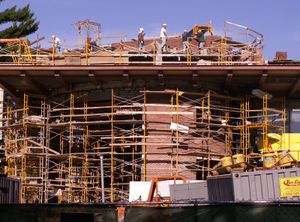 From a February 2, 2007 e-mail from Nancy Roseman, Dean of the College:

Come 7 a.m. on [February] 16th the building is all ours. On that Friday and Saturday the Snack Bar will be open from 8 a.m. to 5 p.m. and the Market Place servery from 11 a.m. to 3 p.m. Both will offer free samplings of food and drink on those two days. Both will begin regular operations that Sunday.

The Winter Carnival official opening event will take place Friday evening in front of the fireplace in Baxter Great Hall.

Grab & Go will move to Paresky Feb. 19th, the new '82 Grill will open on the 26th, and student mailboxes will be activated at the end of Spring Break.

Get excited. But don't go into the building, as it isn't approved for occupation yet.