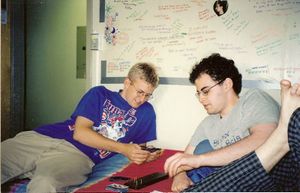 Fun in East 3's common room takes place before the backdrop of their respectably full contact paper quote board. Besides quotes, the board records entrymates' hookup tallies (lower R), the cribbage score (lower left), and some doodles (L).

Traditionally, every entry and many upperclassmen suites have a quote board on which residents, and occassionally sober or not sober visitors, record those special moments when somebody says something that they ought to be reminded of forever. This distinguishes the quote board, which is intended to permanently hold content, from the white board, which is a palimpsest intended for ephemera.

Quote boards are some large material that can be stuck to a wall and inscribed upon. Suites that care strive to put their own mark on a quote board not just in the text, but in the materials. Boards have been made of everything from transparent contact paper to . For ease of quoting in the heat of the moment, wise students will permanently affix a writing implement to the quote board, at least a pen, but the most posh of boards will feature an array of magic markers . . . which will often slowly vanish over the course of a year.

It is a possible point of debate whether a quoteworthy thing one says should go on the nearest quote board, or on your quote board of origin. The most embarassing quotes probably go on both.

Almost without exception, every entry will begin the year with their own quote board. They are fixtures of the common room or hall, and most JA's will ensure one is created. This leads every year to the phenomenon of nearly empty quote boards, on which one may observe a few quotes scrawled early on the year being the only residents of a far-too-large quote board. This looks pretty lame, and to some speak poorly of the ingenuity of the inhabitants of that suite.

As the residents of Mills 2 '03-'04 found out, writing "quote board" on your Beirut table along with a bunch of fake quotes will not necessarily protect it from the iron fist of Williams College Security, especially if one of your fake quotes is, "let's write 'quote board' on it so security won't take it."