Difference between revisions of "Sawyer Library" 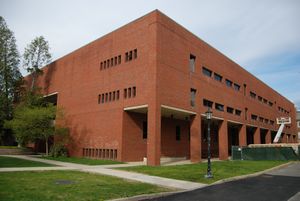 Begun in 1973 and completed in 1975, this brick behemoth cost $4.8 million to construct. It originally had 97,250-square feet of space, which included room for 489,500 volumes. Sawyer holds the majority of the college's books, especially (but not exclusively) those which do not pertain to the hard sciences. Generally, Sawyer draws a predominantly D1 crowd.

Ugly on the outside, bland and depressing on the inside, though not without some small amount of charm.

This author wouldn't call it bland and depressing, but it is certainly easy to get lost in. The monkey carrels in the basement are great! Like indoor treehouses! Sometimes shenanigans happen here too.

Sawyer closes at 2:30 a.m. on school nights, but around 2:15 a.m. any poor souls still there will be jolted awake by flickering lights swiftly followed by a loud GRONK! GRONK! GRONK!. This is to warn of the impending closing. In the basement, the warning is a much more pleasant dingdingdingdingding. Either sound is referred to as the "nerd bell".