In order to avoid this unwanted consequence of THE Greylock Run in fall 2005, Jono decided to schedule it for after his racing season, and for the first time invited all other team members to join him. The run, completed on 6 November 2005, coincidentally the same day as the Schnellstiegen, was a smashing success, with three other XC runners, Ryan Ford '09, and Owen Martel '09, joining Jono for the entire run and surviving. This latest iteration of THE Greylock Run featured a variation in the route, namely substituting the AT and Bellows Pipe Trail for the steep downhill parts of Notch Road|Notch Rd. Despite leaf-pile trail conditions, fog, cold, and sprinkling rain, this route proved a smart alternative to the leg-pounding standard route, also conveniently cutting the total mileage down slightly. Now that it is no longer a solo effort, there is great hope that THE Greylock Run will become a continuing hardcore Williams tradition. 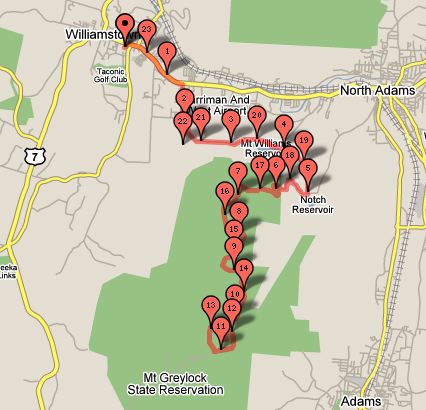