Difference between revisions of "The Greatest Game in the World"

The Greatest Game in the World, also known as "Greatest Game" or "Telepictionary," is a party game similar to Telephone Oracle both in that it involves papers being passed around and in that it is enjoyable regardless of intoxication level, talent level, or... well, basically anything besides sense of humor, which is a must. It is derived from the French surrealist random generator game "exquisite corpse", and occasionally goes by that name.

Players sit in a circle, each with a piece of paper and a writing implement. To begin, each player writes a sentence on the top of their paper, then passes it in an agreed-upon direction. Then, upon receiving a sentence, each player will attempt to draw a picture that depicts the actions of the sentence. After drawing this picture, they will fold over the paper so only the picture is visible, then pass the paper again. Upon receiving a picture, each player will then write a sentence to describe the picture. This continues, sentence-picture-sentence-picture-sentence, until the paper is full (or nearly full). Each paper must end with a sentence.

After all the papers have been finished, players find their own papers, and then in a circle read their initial sentence and what it turned into along the way. Sharing of the pictures attached is also highly encouraged, since often they will be hilarious (and the sentences inexplicable without visual aids). 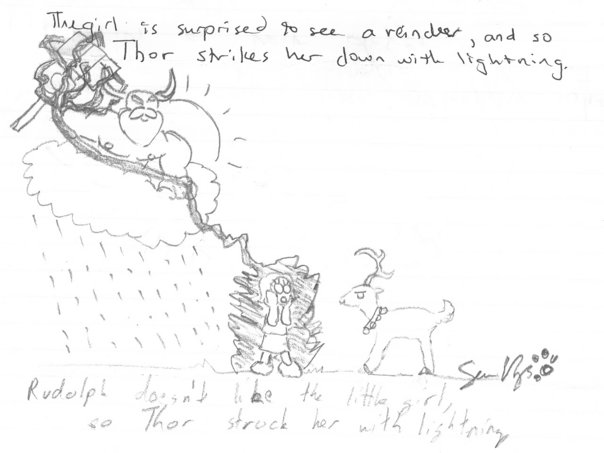 Theory and Principles (or, Overthinking)

For those who like to think too much about their Greatest Game, several interesting principles present themselves during an average game: conservation/mutation and visual vocabulary.

As both of these concepts suggest, the enjoyability of Greatest Game is often enhanced by playing it often with the same people. Once a visual vocabulary has accumulated, any number of strange game permutations can arise.

With your friends, in your common room, probably. If for some reason you don't have friends who want to play this, the Deviants are usually up for a game.