The infamous Wood House party (also known simply as Wood) was an unmasked gathering of ~100 students in Wood House on February 26, 2021. This party resulted in 127 students being sent home to complete the rest of the semester virtually.[1] 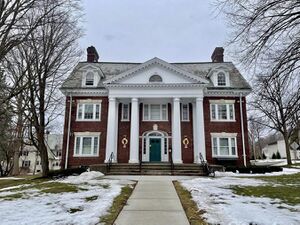 The Wood party was one of several unmasked indoor gatherings during the 20-21 academic year, but it is notable for its size and ensuing disciplinary action. Wood consisted of a collection of separate parties that coalesced into one event. The main party of 80-100 students was on Wood's bottom floor, but many of the students sent home were attending smaller gatherings on the building's other floors.

It's important to note that many of the party's attendees were athletes.

Williams's first response to the Wood party was to send a CSS officer to break it up. Students fled the scene once the officer arrived, and CSS initially made no attempt to gather information regarding the party's attendees.

The day after the party, President Maud Mandel sent out an email to the College's students, faculty, and staff. Maud asked any students who attended the Wood party to come forward or face potential disciplinary action (including possible suspension).

To the chagrin of the student body, Maud also announced that because of the party, the planned loosening of Covid restrictions would be delayed.[2]

The school sought to fulfill its promise of disciplinary action against students who did not come forward, and CSS conducted a thorough investigation. Around 170 students were interviewed.

According to a quote obtained by the Record, CSS used "access records, several witness statements, team rosters, numerous phone tips, [and] invites to the party."

Perhaps most controversially, the College used students' WiFi data to track their locations on campus the night of the party.[3]

The party at Wood caused anger, resentment, and sadness for the 127 students sent home as well as those who remained on campus.

As previously stated, many of the party's attendees were athletes. This highlighted longstanding tensions between athletes and non-athletes at Williams. Many non-athletes decried the athletes' supposed callousness and selfishness in attending large parties despite restrictions. This relates to previous sentiments regarding athletes' privilege and social standing at Williams. For more information refer to the Record article by Kent Barbir, Stephanie Teng, and Katherine Yangto: Wood Party Rekindles Debate on Athletic Culture. [4]

Students also responded negatively to the college's use of WiFi data—viewing it as a violation of privacy.[5]