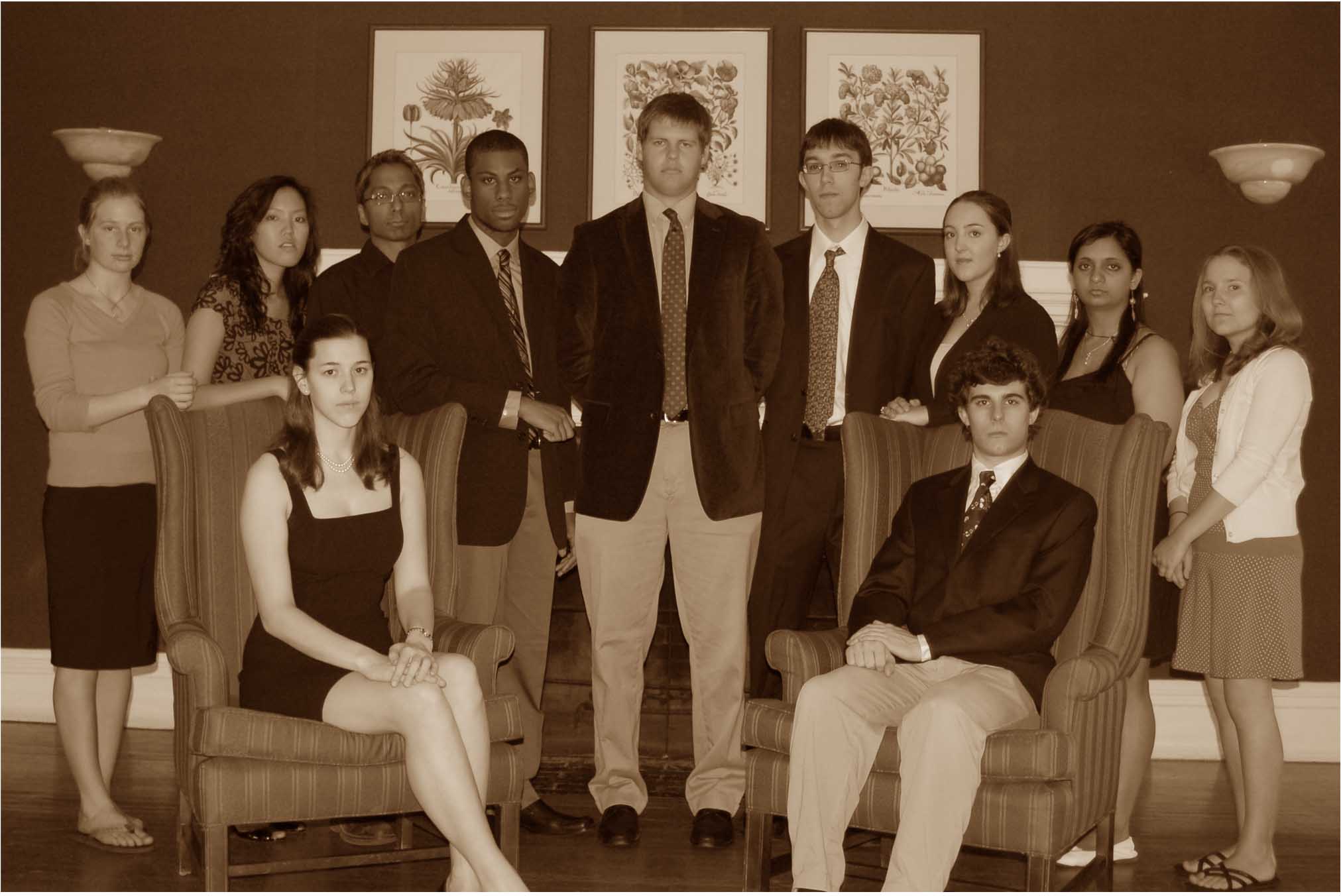 This pilot program for a more sustainable dining experience gave all neighborhood members a Dodd travel mug to be used instead of paper cups. This project was done by the previous Governance Board, Dining Services, and the Zilkha Center.

Dodd created a proposal to remodel the cluster cup in order to get more people excited about it. The OCL prevented the implementation of incorporating intramurals into the competition.

We worked with the OCL and CC to make the neighborhood switch process so it is easier for people to live with their friends.

To make up for the lack of stovetop in Lehman kitchen, the Dodd Governance Board provided two hotplates.

We transformed the limited common space on the third floor of Tyler Annex into a real kitchen with the addition of a refrigerator, microwave, toaster oven, hotplates, and basic cooking equipment. Projects in Progress

We gathered support from the other NGBs to match first-year advisors with neighborhoods to expand interaction beyond the mandatory advising session. We talked with Deans in January and joined a committee on first-year advising. We are currently working with CC to form neighborhood teams for entries.

To review the current Baxter Fellow system, we started a committee with the other NGBs and we wrote a proposal to revise the residential life system.

To make room draw easier, we are making a housing packing with information about each house and room. We gathered information from current and previous residents about their room and we are currently photographing each room. See here for the guide.

The housing survey revealed that the rooms in Dodd and Lehman are generally quite hot. We are working with the Zilkha center to replace the temperature devices so they accurately control the heat.

To address current complaints that first-years do not know the other people in their neighborhood, we proposed to change the affiliations of the entries so they are grouped together by building. We are working with the other neighborhoods and OCL to implement this change.

We wrote a proposal to allow tent parties to occur past midnight. It is currently under consideration by the Office of Campus Life and the Deans Office.

We are doing research on each of the houses to compile the history and old photos. They will be displayed in the houses.

We welcomed the faculty to Dodd with a personalized letter, a Dodd sticker for their ID card, a Dodd pen, and a Dodd magnet for display around their office so others know they are in Dodd.

There have been monthly neighborhood dinners in Dodd Dining Hall for faculty and their families to join students for a relaxing meal with additional activities and visits from the Dodd Dalmatian. The themes have included: Latin American, Greek and German along with the Holiday dinner.

Dodd gardeners joined Professor Ilona Bell for an afternoon in her elaborate garden to plant about a thousand bulbs.

After a schmoozing hour with fine cheeses, a selection of desserts, a chocolate fountain, the Singer/Songwriter Independent Study performed songs they wrote and talked about their creative processes. This was our first alumni event!

More than 300 people gathered in Bronfman Auditorium to watch as Barack Obama was sworn into presidency and a live singing of the National Anthem by the Springstreets. Cosponsored by the Leadership Studies Department, the Roosevelt Institution.

Math Professor Johnson taught students the art of beer brewing and produced several gallons of Dodd Ale. The beer will be served to 21 year olds at a future Dodd party!

Hundreds of children in costume filled the Dodd circle for this Halloween extravaganza with games and candy. Cosponsored by Spencer & Wood.

A group of students helped build a house in North Adams.

To give the hub-house a more festive atmosphere, students decorated Dodd common spaces and dining hall with decorations.

Students and Faculty donated over 30 gifts to the Elizabeth Freeman center which helps mothers and children who have fallen victim to domestic violence.

Dodd Governance Board sent holiday cards to students, faculty, staff, and administrators that are affiliated with the Neighborhood.

The $150 in donations for raffle tickets for a North Face jacket assisted low income families with their energy bills.

Students went to Melbourne Place in Pittsfield to have dinner with community members at this elder home.

Students made cards and baked cookies for the wonderful people on campus who make our lives easier by shoveling snow.

Eight people raced through their portions of ¼ a watermelon at this traditional competition at the back to school picnic.

Twenty pumpkins were beautifully carved by Dodd residents in an event with Halloween themed snacks and music. The pumpkins were entered in a contest judged by Morty.

Students, Faculty, and Alums stopped by the delightful tailgate throughout the entire homecoming game. They were all excited for the burgers, hot dogs, and veggie burgers that were grilled on the spot along with the warming hot chocolate.

Six contestants pushed the limits in how many cupcakes they can consume in 10 minutes.

At these Texas holdem tournaments students and faculty show off their poker skills and compete for gift certificates to local restaurants.

Students raced around the Dodd Quad on tricycles in this Winter Carnival tradition.

Dodd First-Years were welcomed to the community at the purple key fair with pens and stickers for their id cards. We reached out to first years to get involved with Dodd by joining committees.

Dodd First-Years bonded over the Williams traditional screw dance where they were paired with another Dodd first-years in a blind date to this fun party in Dodd Living Room.

Dodd first years took a break from studying to just chill in mission common room. There was cooking baking along with other snacks, board games, and a movie.

Dodd First-Years gathered in Dodd Living Room to relax after the first week of classes and to get to know each other. The Dodd Governance board and Baxter Fellows were there to answer questions about the upperclassmen life in the Neighborhood.

Welcoming students back for the year, the annual bock party took place in the Dodd Quad. There were BBQed foods, games, the traditional Neighborhood President Pinatas, and the annual Watermelon eating contest.

We started off the year reliving the 90s with all of the top pops from high school.

The annual ABC Party was filled with crazy costumes with fun prizes for the most creative attire.

Once a month the All Acoustic Alliance teamed up with Dodd Neighborhood to put on the chill coffee houses with student performers and good food and drinks.

Tally Hall rocked Lasell in their distinctive ties. Tally Hall are an unreal band, signed to the Atlantic label; it has performed on the OC, MTV's "You Hear This" and "The Late, Late Show." This event was cosponsored with SFW NY, Neighborhoods, and ACE.

The experts from Sushi Thai shared their knowledge and trained students on how to make California and Spicy Tuna rolls. Of course, you got to eat what you rolled!

For one night only, NYC jazz musician Lipbone Redding performed in Goodrich Hall with his famed Lipbone Orchestra. This stylish evening screamed “classy” with wine, cheese and delicious, delicious jazz. Cosponsored with the Concerts Committee.

Students from all Neighborhoods celebrated homecoming at the Masquerade Ball with semi-formal attire, masks, and traditional classy beverages and food. Cosponsored by all of the Neighborhoods.

Students flooded to this late night food fest to satisfy all of the late night cravings with tons of food! This event was cosponsored by all of the Neighborhoods.

There was no sleeping until the election was over! Dodd TV room was taken over with sleeping bags, blankets, food, politics, and caffeine. Everyone got a US Map to mark up with state predictions and there were rounds of better for battleground states.

The crew returned to Dodd Living Room at 8pm to share all of their works from the semester and talk about their creative processes with food and drinks provided.

Dwight Dodd brought chewy cookies to the students that were hard at work in Schow and Sawyer during finals.

Hundreds of cupcakes of all sizes were decorated with a variety of toppings by the creative attendees.

A fun night of fondue occurred in Dodd Kitchen with cheese and chocolate fondue and tons of dipping foods.

Goodrich Hall was streaming with red, white and blue as people celebrated the inauguration in style at this Semi-formal. Along with tons of patriotic giveaways, there was a balloon drop with over 1,000 balloons! The food was delicious and the drinks were classy. Cosponsored by the BSU and College Council.

Over 500 students filled out this fun, quirky survey to find out who their *true loves* and *best friends* are on campus.

The website http://williams.goodcrush.com/ allows you to anonymously email someone you have a crush on and will let you know if the feeling is mutual.

VH1 called him the best stage hypnotist on the planet and he brought a packed Goodrich to life with a solid 90 minutes of laughter as 30 Williams volunteers from the audience were hypnotized on state to believe the most ridiculous ideas to be true.

Alvin Lau is an Asian-American professional slam poet who has been featured on NPR, twice on HBO's Def Poetry Jam, and Oprah! To date, Alvin is the HIGHEST RANKING Asian-American slam poet of all time.