Difference between revisions of "East College" 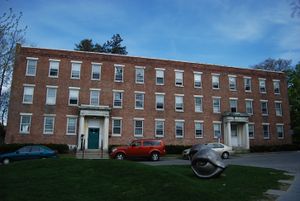 The second-oldest building on campus, it was constructed in 1798, several years after West College. They were creative with the building names back when the college was founded, weren't they? East college burned in 1841 and was rebuilt in 1842. The entire interior was gutted and reconstructed during the summer of 1956 using unusual construction methods and utilizing prefabricated steel and concrete slabs and partitions.

East College was previously one of the first-year dorms in the Odd Quad, along with Fayerweather Hall. They are now both upperclassmen housing in the Currier cluster. Both of theses dorms feature horizontal entries, unlike the vertical entries in the other freshman housing Morgan, Lehman, Sage, and Williams Hall. East is located directly across the quad from Currier, and is thus an excellent position for aspiring WARPies or Deviants. Unfortunately or fortunately, depending on the day of the week, it is also located directly across the eyeballs from Goodrich, which can get rather annoying for first-years trying to do work on weekends, but does make stopping for coffee on the way to class quite convenient. Make sure you check out the eyeballs at night, when they light up! East is also conveniently close to the gym.

East features relatively large rooms and, in its days as a first-year dorm, had the largest rooms for frosh. Since the inception of neighborhoods and renovations to the common rooms, East College is now an upper-class dorm, expanding the housing options for deviants and their kin.

The top floor of the East frosh dorm in the Odd Quad, four of East 3's rooms are probably the most desirable freshman doubles on campus, and one of the JA rooms (north end) is the largest JA quarters on campus.

East 308 holds the odd distinction of having housed two of the four generations of contradance callers to pass through Williams. If there's still a dark line about the width of duct tape going across the room, it's from the second generation, Bill Sacks '03. If there's a black ring on top of one of the bookshelves, it's from the iced-tea mix cannister of the third generation caller Jonathan Landsman '05.