Difference between revisions of "Jono Dowse"

Jono is yet another FORMER denizen of Green Up, along with such figures as Colin Yee '06 and Daniel Klein '06. He hails from a town in New Hampshire that's even smaller than Williamstown, and he likes phonetics. A bit too much, perhaps. During the '06-'07 school year, he lived near Tufts and worked at Albert, Righter & Tittmann Architects in Boston. He also managed to run the Boston Marathon poorly that spring. Currently Jono is an architecture grad student at Washington University in St. Louis.

Jono's other interests include Reason, type design, Swiss German, keeping a nature journal, and following H*R plus a scarily large number of webcomics. He also created Goofy Star Dude and is a great guy to boot. Jono went to Switzerland to study rural building in summer 2005 and took 4000 photographs and many of those can be found in the report he wrote about his observations and in the large photo gallery he is working on getting online.

Jono is an alum of the Williams cross country team, to join which he quit marching band (Jono admits: well, I guess I pretty much did), and is known to run really excessive distances on occasion and to attempt to get others to do the same. For example, every year while he was a Williams student, Jono did THE Greylock Run.

Also, he eats snow. With honey.

Check out his mad status among students with language skills.

Jono had the best stache at the 2006 Stache Bash by 1 order of magnitude, i.e. the Double Bolts: 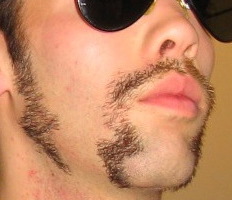