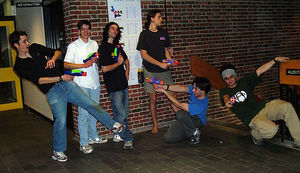 KAOS alums pose together in Bronfman during Homecoming 2008 after a few rounds similar to KAOS's final round.

A campus-wide game that takes place during Winter Study, Killing As Organized Sport (KAOS) is a proud Williams (started by Danniel Arramini '84 and associates) that brings students closer together through the magic of paranoia, assassination, and psychological warfare.

The basic idea of KAOS is simple. Each player receives a weapon and a target to hunt. Annoying constraints such as lawsuits and noise complaints from elderly Williamstown inhabitants prevent us from using actual firearms. These are replaced by silent, non-lethal plastic guns of dubious South-East Asian origin. In any case, each player is being hunted by another player. If you are killed by your hunter, you are out of the game. If you survive and make your kills, you live. Eventually, only one player remains.

Registration for KAOS occurs online, but, as with many things at a liberal arts college, if you show up to the weapons depository wanting to play, odds are "it's all good."

Following registration, you will receive information for picking up weaponry (often in a lovely shade of orange for easy findability) as well as information regarding your first target and the rules of the game.

The killing commences (yay!) at a time determined by the lord of KAOS, often in the wee hours of the night and/or morning. In essence, "killing" your target consists of hitting your target in the torso (no limb or head shots) with one of several projectile provided along with the weapon: either a small, yellow bullet (speedy and accurate, two great tastes that taste great together) or a more nostalgic orange suction cup dart (slower but easier to spot and recover after shots). Upon killing your target, both parties must report the incident to KAOS Command via email; the victim is out of the game and the victorious assassin is given a new target, presumably the former target of the recently departed player.

The hunted are not without defenses against the hunter, however. If one manages to ascertain which player is trying to eliminate them, the former can shoot in the latter and "stun" them, preventing them from engaging in further aggressive behavior for a fair span of time (12 hours in the case of the 2007 game, 24 in past games).

Needless to say, the complete rules are far more technical and complex.

As with any system in which young individuals are given weaponry and let loose, there must be a check on their anarchy, and that check is The Death Squad. If any KAOS player fails to eliminate their target within the allotted timespan (48 hours or 72 hours depending on the number of players), their name is placed upon a Death List, at which point their life becomes forfeit. Now, unless they manage to eliminate their target and remain hidden for the next 12 hours, they will be mercilessly tracked and eliminated by an elite force of warriors whose weaponry includes heavy-duty Nerf guns, swords, and, according to some sources, a rocket-powered grenade launcher.

If KAOS Command is made aware of any broken rules on the part of a participant, their name is likewise added to the list. KAOS Command reserves the right to simply remove a player from the game, but except in extreme circumstances prefers to allow them to retain their honor by being slaughtered by a barrage of styrofoam balls.

Oh, and you can't kill members of Death Squad. So don't even try.

Tried and true (or false)

A man and women meet at a party. He is immediatly attracted and drops his guard. At the end of the night, the two leave together. The night is long... but we don't need to go there. He wakes in the morning to the barrel of a gun.

One hour in a garbage chute is what it took to win KAOS 97. Ventilation shafts are also a good bet (worked in Star Wars).

A cautious player never showers in the same place twice. Many won't even sleep in their own room. Why endanger yourself for bodily functions?

Even if you're missing out on firing projectiles at your dearest friends, you can still join in the fun! Merely shouting "BOO!", opening a door, or breathing can cause high-strung active participants to "freak the flip out," much to the amusement of all.

No, you're not allowed to use an umbrella as a shield. Live with it.

In any war, there are heroes, and the war of KAOS is no exception. These are their stories.

I had heard from many sources that my first assignment -- we'll call him 'Roger' -- was going to be nearly impossible to catch. I contemplated just trying to stay alive until the Death Squad inevitably came after me. But then on Sunday I developed the Plan. I heard through a friend that Roger was on the winning Trivia team, so I decided to pose as a Record interviewer despite never having worked for a newspaper or conducted an interview. One friend lent me her miniature tape recorder and another, Ben, who had already been killed, came along posing as the Record photographer. We knocked on Roger's door and suddenly the door next door busted open to reveal Roger pointing his gun straight at us. 'Excuse me, but we're from the Record and were wondering if we could interview you as a member of the winning Trivia team?' 'Oh, you'll have to pardon me, I'm playing KAOS.' 'Oh, don't worry, I understand. I have entrymates who are playing.' He proceeded to allow Ben and me to enter the room. His roommate was also present. We sat down on the bed and I began to conduct the interview. We had thought up a few questions ahead of time but obviously not enough as not once did he stop twirling his gun around his finger. I kept making up questions, hoping that he would relax enough so I could reach for my own gun jammed in my coat pocket. During the questioning, I only slipped up once, but it could have cost me the kill. 'So what do you find most challenging about KAOS? I mean, Trivia.' Finally I decided I couldn't question him any longer. 'Crap, the tape just ran out. Hang on just a sec while I change this tape.' 'Oh hey, the captain of the Trivia team lives in the suite across the hall. I'll go get him for you.' I looked at Ben. The window of opportunity was closing quickly. If the captain entered the room first, there would be too many witnesses. Roger reentered the room and I shot him just as the captain, coincidentally a member of the Death Squad, came around the corner.