Difference between revisions of "Womens Rugby"

The Williams Women's Rugby Football Club (WWRFC) was founded in 1976, making it one of the oldest women's teams on campus. The WWRFC currently competes as a Division II team in the New England Rugby Football Union (NERFU) in both the fall and spring seasons.

Despite its (deserved?) reputation for lively social events, at the heart of the women's rugby team is the players' dedication to the sport. The WWRFC currently fields two full teams (A-side and B-side) and practices 5 days a week on their Cole Field pitch. The club boasts players from a wide range of athletic backgrounds because, not surprisingly, most of them joined the team with no previous rugby experience. It is remarkable that in a conference containing some of the top women's clubs in the nation, the WWRFC is persistently recognized for exemplary sportsmanship and clean play. And for hosting unrivalled postgames.

The team colors are maroon and gold, a legacy of rugby's fledgling days at Williams College. After being denied endorsement and funding by the administration, Williams students who wanted to found a rugby team received unexpected assitance from their comrades at Oxford, who had introduced them to the sport. Oxford's donation of balls, equipment, and a full set of their own maroon and gold uniforms enabled the founding of the club. In honor of their contribution, the Williams team adopted Oxford's colors rather than the traditional purple and gold. The team's mascot is the Lady White Dawg, a proud and elegant creature with a fondness for routinely thrashing donkeys.

The Men's Rugby Football Club may have been around since 1509 but they've only been getting laid since 1976, and only then occasionally, on Thursday nights. No longer can they lay claim to being the only rugby team on Willipedia. Who's cool now? 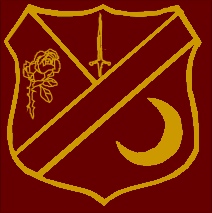