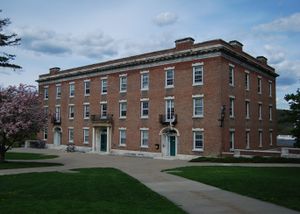 Currier is a dormitory on the Berkshire Quad, unique both in architecture and traditional inhabitants. Three floors rise above ground and one, despite being called the basement, is below ground on the quad side but opens into air on all other sides. It is one of the core Odd Quad buildings, in that, along with Fitch, it traditionally houses upperclassmen of the Deviant and WARP culture type, and others who enjoy their company.

As all dorms of the Berkshire Quad, Currier is served primarily by the Driscoll dining hall.

To a bird's eye, Currier is shaped like a blocky "C", with its arms opening east. Windows offer views in all directions, and the Currier 3rd floor rooms with a vista towards the mountains probably have the most beautiful views on campus. The west side of the building features a view of beautiful Berkshire Quad, and three balconies accessed by large French windows on the second floor. The outer two of these balconies attach to common rooms, but the center has the distinction of adjoining Currier C21.

The idiosyncratic layout of Currier's interior gives rise to some strange features. Two very large stairwells of slate steps that provide access from the first to third floor occupy a large volume of the space inside. The stairwells divide Currier into north, center, and south suites, with about six rooms on each of these suites. The north- and south-west corner rooms are quite coveted for their size, light, and views of the quad.

The common areas on the top three floors are the negative space amidst the odd positioning of Currier's rooms. The center halls of the second and third floors have no common space of their own at all; the first has an enormous room that is typically the house gathering space. On the north and south ends of the buildings, common areas take a different shape depending on the floor. The second floor's are quite awkward, and defy description. See the plan here, or just imagine a rectangular room with a big bite taken out of the top.

For most dorms, it is not worth writing a seperate section for a seperate floor of the building, but Currier basement is one of a kind, and is isolated almost entirely from the floors above. The only way to get from the basement to another floor without exiting and reentering the building is via a treacherous spiral staircase running from the garbage room on the first floor to a landing in the center of the basement. Residents of upper floors carrying loads of laundry have a tough choice between the hassle of picking down the spiraling stairs, whose metal surfaces are more like rungs than steps, or leaving the building quadside and reentering through the center door.

The crown jewel of the basement is, without a doubt, the ballroom, which deserves its own section below.

Rooms in Currier are high-ceilinged and generally large, with the most coveted facing north and featuring balconies that, unfortunately, nearly abut Route 2. Champion among basement quarters is B11, the gargantuan double in the northwest corner, which has an old (sealed) fireplace above which is fixed a large stone face.

Occupying the lion's share of Currier's basement is its ballroom, a one-of-a-kind social space on the Williams campus. After Goodrich Hall, the ballroom is probably the second most booked space on campus for social and arts events, and it has played host to all manner of activity.

By class year, Currier is probably the most diverse house on campus, both because of its range of quality of room and the range of reasons that drive people to live there. On the one hand, some of Currier's rooms are first rate, desirable for purely their own sake. On the other, Currier has a recent history of being Odd Quad in nature, and Odd Quadders have been willing to live in any kind of squalor to be near each other, quite willing to take the less desirable center rooms in Currier for the quad's unique social scene.

Though Currier has earned a reputation as the younger Odd Quad dorm (sophomores and juniors to Currier, seniors to Fitch and Prospect crow's nests, it always holds a large number of people from other social groups. The layout of Currier, with its many fire doors and stairwells that strongly divide the space, allow for a a compartmentalization of groups if those groups will it, while spaces such as the ballroom and first floor common room allow larger bodies to meet.

Currier's residents have made their dorm the primary home for these activities in the past and present: