Difference between revisions of "Sheafe Satterthwaite"

Sheafe Satterthwaite is a sixty-seven-year-old bachelor, who arrived on the Williams Campus in February 1968 as a research associate in environmental studies (at first studying and writing about the leisure home phenomenon) and who commenced teaching in the art department, with the Campuses course, in the fall of 1970...

Sheafe attended the Putney School in Vermont for high school, and went to UVA. He doesn't have an advanced degree and he doesn't publish, so he can't be a real professor; he is perpetually a Lecturer in Art.

He is on his eighth five-year contract. The rumor is that he makes $1 a year; however, this rumor is unsubstantiated by any source.

Sheafe lives on a seven-building estate to which he refers as "the albatross." It is in New York state, about an hour from Williams, so he has a long commute. The albatross has a barn whose upper floor is a library with more volumes than those of some small towns, and the lower floor houses a wrestling room that one Williams student described as "unlike anything I have ever seen before." He also maintains a residence in Putney, VT.

Sheafe refers to students by their last names, usually in all capital letters, as in, "according to SMITH..."

"Sheafe" is actually a last name. There is a Sheafe Wharf in Portsmouth, NH.

Fun fact: Once, Sheafe got a letter in which his last name was spelled Fatawaterthwaite. He saved the envelope. 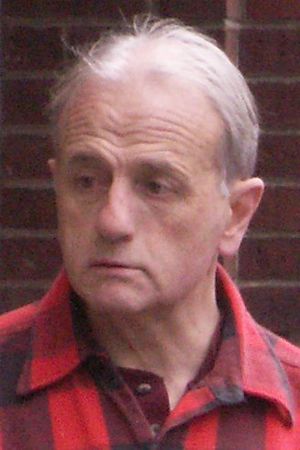 A recent picture of Sheafe. You can imagine him speaking his autobiography.

At the beginning of each semester, Sheafe has each student write a two-page autobiography, and hands out his own as an example. He writes a new one each time. This is the one from Fall 2006.

Sheafe Satterthwaite is a sixty-seven-year-old bachelor, who arrived on the Williams campus in February 1968 as a research associate in environmental studies and who commenced teaching in the art department, with this very course [American Landscape History], in the fall of 1970. He got here in an under-handed way (through personally knowing the college's president) in that his one sister took Economics 1 at Harvard (she being at Radcliffe) in 1949 and her instructor was a tutor named John Edward Sawyer, whom she came to know well and work for after college, the so-called "Cambridge Rut" -- the pattern of Harvard students not wanting to leave Alma Mater. I (as a teenager) too came to know Sawyer (eventually the Williams president known as "Smilin' Jack") when I was at the Putney (Vermont) School and he was teaching American economic history at Yale -- I well recall the initial meeting, a luncheon at a Yale hang-out, the greasy spoon known as Dick and Harry's (or so I believe, and is that culinary "institution" still gracing the Elm City (of yore)?). Between Putney and Williams (or 1956 and 1968) I would go on to Mr Jefferson's academical village and come to work for what some people thought was a canning company, Wildlife Preserves, actually a New Jersey-based land preservation organizatin concerned especially with wetland (waterfowl?) habitats. Quite a bit earlier I had become an assiduous looker (or birdwatcher), through my paternal grandfather's giving me a National Geographic birdbook, and my getting to such famous ornithological sites as the Joppa Flats near Newburyport, Massachusetts and nearby Mount Greylock (to hear, if not see, the elusive Arboreal Zone Bicknell's thrush) and Troy Meadows, New Jersey (this fresh water marsh "the canning company" owned). For Wildlife Preserves, between 1962 when I departed from Charlottesville and the 1968 arrival in Williamstown, I had spent a good bit of time in North Carolina, in an abortive campaign to keep development off Bald Head or Smith Island (alias Cape Fear), then one of the less trammeled Atlantic shorelines. This defeat caused me to become attentive to "development," and was an intellectual turning point -- and a wellspring for [Art History] 201. (In North Carolina I wrote a book on Cape Fear with the forest ecologist Arthur Cooper of North Carolina State University where I would come to teach in the landscape architecture department, during an early leave of absence from Williams, during the spring semester of 1970.) Also, my earlier leaving the Choate School for Putney (which had, and still has, a "working farm" serving its curriculum) -- this movement from one boarding school to another boarding school expressed a "pull" towards an ersatz agrarianism. Indeed after leaving the University of Virginia, I hankered to become a farmer -- something I've only known in one Billsville student, the ex-201er and New Orleans denizen John Kinnabrew, who spent at least one summer while at Williams laboring in serfdom for Sam and Elizabeth Smith at the community agricultural enterprise in South Williamstown known as Caretaker Farm. My main agricultural experience, as a laborer, was working for, or with, my friend the dean of Vermont blacksmiths, Peter Krusch, on his Pumpkin Harbor Poultry Farm in Cambridge (just north of Stowe) -- when not in North Carolina or New Jersey, during the Sixties.

I am a suburban child, the Satterthwaite clan having migrated out of New York City just as soon as the tracks got to Nutley (in the late 1860s?) on what my paternal grandfather would call the Thames of America, namely the very much transgressed Passaic River (during my childhood an open sewer?) which flows past Newark and into Lower New York Bay. (Now no Satterthwaites, a dwindling clan, reside in Jersey). My hometown was Tenafly, on the shores of the Hudson opposite (and bordering) the Bronx, although few "see" that congruency, out where the state lines meet, in the middle of the Hudson River. My childhood was very much as if residing in an appendate of New York City -- trips there were frequent and easy. To it my father daily commuted -- idyllically? -- by foot fifteen minutes to a railroad station, then by rail to Jersey City (later Hoboken) for a half hour or more, then (the idyllic part) by ferry boat (replete with teak and mahogany capacious lounges, for Ladies and Gentlemen, on boats with names like Weehawken"), this across-the-river ride a ten minute affair, debarking you at Barclay Street, and finally a ten-minute walk to 44 Wall Street and the French Jewish brokerage house, Lazard Freres, My father's "field" on Wall Street was what the Williams economics department would label "public finance;" he was a national authority on state and munincipal debt and capital finance -- for highways, sewers, schools, airports, and other "public infrastructure." So his two children, and especially his daughter as a city planner, are continuing in his footsteps. My mother had been a journalist and the brazen questioning you may witness (and be embarrassed by) when we are in the field no doubt is the maternal heritage of fiery Scotch-Irish Presbyterian righteousness. (I recall her once remembering how she had a piano thrown at her, which now maybe sixty years later seems quite far-fetched, but little deterred her from knocking on a door to find out information from an occupatn, if a specific need for knowledge got into her head -- and an "informant" possessed it!)

At Williams I am something of a faculty anomaly: untenured, with a succession of five-year "contracts" (the present one ending in 2011, when I will be seventy-two years of age); comparitively unpublished; with a very large number of courses which I offer, some seventeen in number which, other than for 201, I rotate around through -- all "American," whether transport history, dwellings, suburbs, cities, campuses, agricultural history, women (and the American landscape, a new offering this coming [2007] spring), and so on. I see 201 as my main course offering and as an (unrequired) precursor to the subsequent courses, although some wags feel all Sheafe courses are the same, only the title varies! Now I am of an age when children of past students matriculate into my classes: young Lanier, young Jenks, young Tone, and so on. My first hope -- albeit in an "art appreciation" sort of way -- is that students will emerge from a Sheafe course more "sentient." I am also interested in inculcating, to the extent possible, a certain kind of academic personality: given to inquiry; given to discussion and disputation and argument; comfortable with self-expression -- most all my courses have the weekly essay / no testing format, for better or worse. The subjects I am involved with tend to be highly synthetic, and the success of a Sheafe class very much depends on the contributions of classmembers, especially in suggesting how their various majors may be represented in the landscape: economics in terms of real estate expressing a "market;" psychology in terms of people's activities expressing behaviour patterns; political science in terms of objects we study expressing institutions, be they a state highway department, a zoning board, a small town government, and so on.

Let me conclude (this initial draft) by quoting the late essayist Susan Sontag, in advice she gave a group of Vassar students a few years ago: Do stuff. Be clenched, curious. Not waiting for inspiration's shove or society's kiss on your forehead. Pay attention. It's all about paying attention. Attention is vitality. It connects you with others. It makes you eager. Stay eager.

The quintessential Sheafe course is Art History 201: American Landscape History. He also teaches sections of the Art History 101-102 sequence. Other courses are Campuses and Women.

The most important part of a Sheafe course is the field seminar. Once a week, you spend the afternoon driving around in a van with Sheafe. He points out things as you drive around; you stop and get out and look at things; and you talk to people. Usually, this results in a lot of learning, though not the kind that one could put on a test. Most often the afternoon will involve a stop at a place to get food. This could be a convenience store, a bar (to get Cokes), or the Blue Benn Diner.

Where to find Sheafe